Sometimes, I like to donate my time and resources to various local organizations. Over the weekend I went to take photos at the Kent Community Dinner presented by All Together Now, a community-wide pot luck dinner with a focus on bringing together people from different cultural backgrounds to promote a greater sense of coming together. The venue also moves from event to event, and this weekend, it was hosted by the Islamic Community Center of Akron. It’s a beautiful mosque, with an expansive prayer room, and huge dining hall that was full to bursting.

Everyone there was spectacular too. There were people from so many different cultural backgrounds from every corner of so many different local communities. On top of all of the beautiful Muslim dress, I saw someone in a kilt, a Slavic cape, and even some crazy costumes from representatives of interfaith churches.

However; what stands out most in my mind is one small, burqa-clad woman working in the kitchen with one of the warmest smiles I have ever seen. She came up to me while I was shooting, and said I looked tired, and offered me some of the desserts she was preparing. I told her that I was fine, not tired, but maybe just a little thirsty. She scuttled out of the kitchen, and returned with a large bottle of water and a cup. And, later, when dinner was being served, she found me and made sure that I had something to eat, even though I was shooting. They were small gestures, but they meant so much to me. I really just wanted to give her a giant hug. Not sure if that would be allowed though.

See, I’ve studied other cultures since I was a kid, but I caught myself surprisingly ignorant of much of the culture standing before me. I wasn’t completely uninformed, being an avid news consumer, interacting with Muslim culture around campus, but I still felt poorly equipped. That is something that needs to be corrected. Then again, I guess learning about other cultures is what the community dinners are based around.

This is my third time covering this event, and the best time I’ve had so far. Everyone was amazing, I learned a little, and I got some nice photos. I can’t wait to cover the next one. 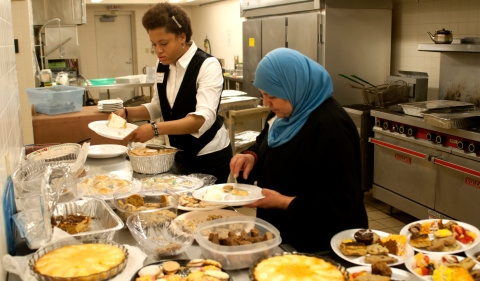 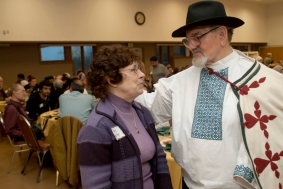 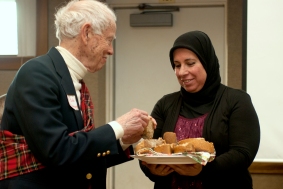