A few weeks ago, my friend Ian messaged me about planning a group expedition to Helltown, an actual ghost town not too far away from Kent. , Helltown (formally Boston, Ohio) supposedly a completely abandoned town, left to rot as the paranormal set in. I did some digging online and learned that the government had purchased the land through eminent domain to add to the area’s parks, but never bothered to do anything with it. Since then, rumors of everything from ghosts, to mutants, to Satanists have grown to surround the area. It had all mostly been debunked, but it still sounded like l could get some creepy photos out of it.
With all that in mind, Ian, Paisley, and I headed out to Helltown. I was assuming that the rumors would oversell this place, but I figured I’d at least get to see something resembling a ghost town, but even that was more than we saw. The “abandoned” homes were few and far between, surrounded by what looked like a healthy, small town. Even if the town was much more inhabited  than we expected, we still roamed around the area, looking into all of the various “paranormal hotspots” that were referenced online to see if we could find anything.

The first stop was the cemetery. Most of the stones were so old that the writing had been worn away, and many were broken. 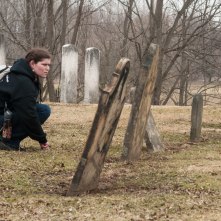 Paisley inspected the tomb stones and tried to piece together various family legacies. 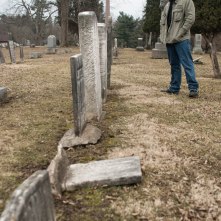 Ian, our resident paranormal aficionado , spearheaded the expedition into Helltown. 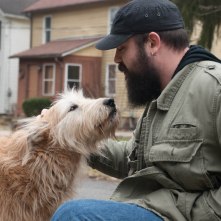 We saw a dog napping on a porch as we wandered through town, and I went to photograph it. I took a literal one step into the yard to get the better angle. This was evidently enough to rouse the canine. Luckily, not only did she turn out to be friendly, Ian is some sort of dog whisperer.

We reached the infamous “End of the World” road that was supposed to be a ridiculous drop, and haunted on top of that. When we reached the peak, Paisley and I decided to walk down and check it out. And… while steep, the hill just ends with a concrete barrier and some foot trails in the woods. 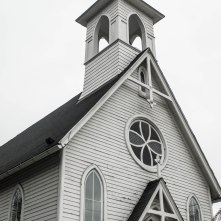 A focal point of a great many of Helltown’s numerous legends was Mother of Sorrow, the “Satanic” church in town. The site is thought to be satanic due to the inverted crosses incorporated into the church’s architecture. However, in Catholicism, the inverted cross is the symbol of Saint Peter, who thought himself to be unworthy to be executed in the same manner as Christ, and demanded to be crucified upside down in a sign of humility. 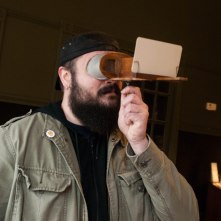 Since all of our attempts at finding anything haunted came up empty, we decided to poke around the local heritage museum for more leads. We were pointed in the direction of the covered bridge, and got to play around with an old-timey photo viewer. From there, we headed to the historical Stanford House… 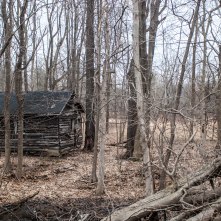 While the Stanford house was indeed beautiful and inviting, this place was sitting in the woods about 50 yards away 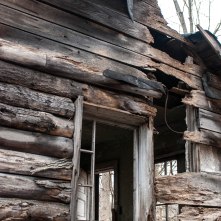 I know that I should have been worried when I found a dilapidated shack in the woods in a supposedly haunted area, but by this point, I was just glad to finally find some creep imagery. 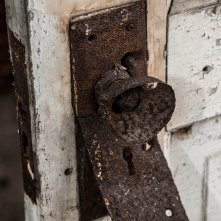 Every inch of this shack was completely falling apart In the creepiest way possible. Seriously, there is cabin couldn’t have been a more fertile ground for nightmare fuel if someone had planned it.

While we didn’t see anything haunted, I still held out hope that I would find something ghostly on the photos once I got home. Sadly, everything I edited in post was all free from the paranormal. I guess that means we’ll just have to keep looking.

One thought on “Helltown”